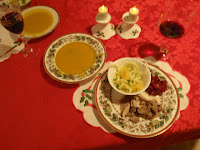 The morning after Thanksgiving, Chef Emeril was on a network morning show demonstrating how to do something different with your turkey leftovers. He was making a grilled cheese and turkey sandwich, I believe. But it wasn’t that trick of Emeril’s that I used, but a recipe on his new Emeril Green show on Discovery Channel. He made a simple salad with fennel, green onions and oranges that I thought looked so easy and refreshing. It just so happens, I had a fennel that I picked up at last weeks farmers market and green (spring) onions and naval oranges from Whole Foods. I didn’t have all the ingredients for his dressing, so I improvised with juice of one lemon, and one orange, hot pepper garlic sauce, and powdered ginger plus olive oil. It turned out great! Here is the link to his recipe: http://planetgreen.discovery.com/food-health/emeril-fennel-salad.html 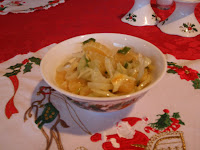 I also had lots of leftover pumpkin that wasn’t needed for my pies. So I whipped up a pumpkin soup, and served the soup and salad with the turkey reheated in gravy. By the way, I found the World’s Best Turkey recipe on The Huffington Post blog. It called for 2/3 a bottle of champagne to be poured into and over the bird! WHOO HOO! I cooked a Heritage Turkey with it, after brining it for 24 hours. It was indeed the Worlds Best! I learned a secret from the author of the Grass Fed cookbook. Take the turkey out when the thermometer says 165 degrees, and carve the white meat. Then put the dark meat back in the oven till it is done. The white meat was so moist! Here is the link to the recipe: http://www.huffingtonpost.com/2008/11/24/thanksgiving-recipe-world_n_146177.html