California Moves to Take Away Citizens Right to Board Cows, Goats 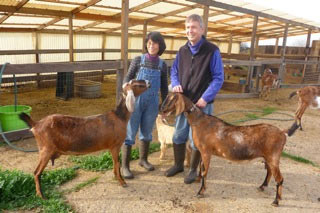 Michael Hulme is a 67 year old former Vice President of Business Development for a semiconductor firm. He lost his position as a result of our nation’s economic downturn. Because there were no jobs to be had in California, he and his wife decided to make their love of animals into an enterprise. 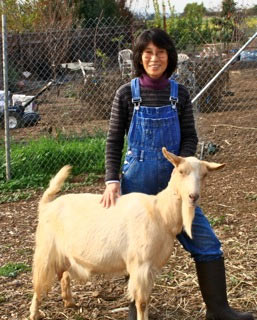 Jane Hulme and a Guernsey Goat

With his wife’s help, Mike started PetsTouch.com in 2005, a San Jose based pet services exchange and petting zoo. They found their way to goat breeding quite by accident. They volunteered to care for 13 rescue goats. The goats eventually moved on to a new home, but they enjoyed them so much they went and got some Nubian goats.The couple then learned of an endangered goat breed from a friend.

“It was a cause we really believed in,” exclaims Mike. They became one of 18 goat breeders in the U.S. dedicated to bringing back the threatened heritage breed of goats, the Guernsey. This golden long hair breed originated on the British isle of Guernsey and today in the U.K. there are less than 500 that remain.

To support the goat breeding program, Mike and Jane have investors that buy the goats, or a share in a goat. The investors reward? Fresh goat milk. City dwellers who are excited about the health benefits of raw milk sometimes decide to drink goat milk, because for some, it is more digestible. It is also highly prized by those with health problems as a healing agent.

However, there are no licensed commercial dairies in the state producing goat milk. Hence, herdshare and goatshare programs cropped up to meet the consumer demand.

This year, all his investment of time, money and labor was about to pay off. He was set to break even on this new enterprise.

The California Department of Food and Agriculture issued a cease and desist order around the first of July to Hulme and five or 6 other herdshare programs in the state. Now, Hulme stands to lose $50,000 this year, instead of getting into the black.

This San Francisco Chronicle story explains the economics of why no commercial goat dairies exist in California, and why Michael Hulme can’t financially afford to comply. Government regulations have made it wholly impractical to run a conventional goat dairy farm. In Mike’s case, he can’t even obtain a permit for a dairy in his location.

“If I ignore what they are telling me, I run the risk of being jailed or fined. The CDFA actions are putting me out of business,” laments Mike. Julie Matthews, a certified nutrition consultant is one of the affected shareholders. She and her husband, Martin have a 16 month old baby who has been on homemade raw goat milk formula since she was one week old. Julie nursed her baby, but was only able to partially supply the nutrition the child needed. She and Martin have been raw dairy consumers for 6 years, but they sought out goat milk because their baby didn’t do well on cow’s milk.

Julie has found that the commercially available formulas are lacking, she says, “Commercial formulas are inferior. Raw milk formula is a really valuable option.”

Farmer Hulme confirms the fact that fully 50% of his shareholders need this milk for medical reasons.

One family has a young girl with Irritable Bowel Syndrome (IBS), only goat milk normalized her bowels. The child is now back on medications, because the government has cut her off from the goat her family owns.

One gentleman has a damaged liver from pharmaceutical medications. He drives a long distance every two weeks to get his goat’s milk.

Other parents bought goats when they found their children were intolerant to cow’s milk, and they needed to access goat milk. In a letter of support, Mark McAfee, owner of Organic Pastures, a large commercial dairy speaks of the sacred right of people to have access to unprocessed foods.

Shortly after the CFDA Cease and Desist letters went out, McAfee toured and videotaped milking sessions at two different cow boarding operations. He said, “I was extremely impressed with the meticulous care, the cleanliness of these farmers, the safety protocols were pasted on their walls to insure that all procedures were followed. The milk tested had zero coliforms, standard plate count, 100. These cowshare operators really take food safety seriously. They are so passionate about it, they don’t need government oversight.”

The way Michael Hulme sees it, “This enterprise is self regulating. My farm and milk is 10 times cleaner than the typical factory farm. I drink the milk, many times a day, so I personally am the tester. I would be out of the goat boarding business in a heartbeat if I provided the goat owners with tainted milk.”

“I feel very strongly in the nutritional value of raw milk, as a citizen I feel passionate about the freedom to choose the food that I feel is best for my family. As a mom, I have concern for my family. This is a huge issue of access to food. The state is acting like we are stupid, and they need to protect us. I consider myself very well educated and quite frankly this is insulting.” –Julie Matthews

Here is Martin and Julie’s blog and radio show about this matter, Attacks on Fresh Food Becoming Personal.

Kimberly Hartke is the publicist for The Campaign for Real Milk, a project of the nutrition education non-profit, the Weston A. Price Foundation.