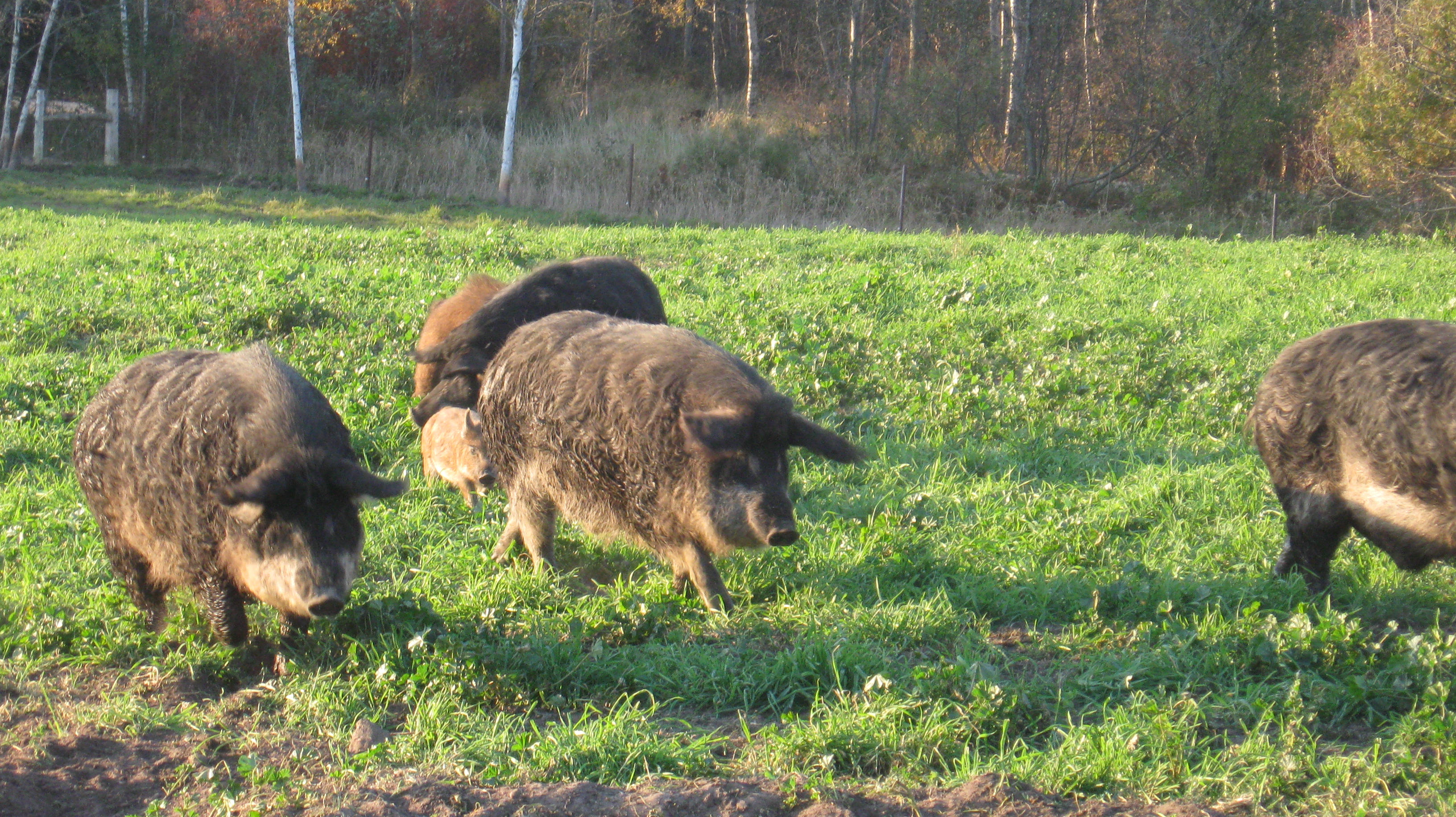 The Michigan Pork Producers Association is endorsing a radical move on the part of the Michigan Department of Natural Resources (DNR). The DNR has declared feral pigs, an “invasive species.” Under their interpretation any domestic pig can be considered feral. The DNR is putting fine dining chefs and the farmers who supply them on notice. Heritage breed pigs may soon be off the menu, and prohibited on pasture-based farms. Also affected, will be the many Michigan families who choose to buy humanely raised meat for their family table.

Mark Baker, retired military, nearly signed a contract to become an industrial hog farmer. That all changed when he heard Joel Salatin of Polyface Farm speak. Joel is a Virginia farmer and author of the new book, Folks, This Ain’t Normal: A Farmer’s Advice for Happier Hens, Healthier People, and a Better World

Inspired, Mark laid aside the CAFO contract, and decided to start a traditional farm, where chickens and hogs run free on lush pasture land. His oldest son was 7 at the time. Today, Mark and his wife Jill have 8 children.

Everyone in the Baker family pitches in to help tend to the animals. Even the 8-month-old is with his mother in an over-the-shoulder baby carrier, as she does her farm chores. Mark and Jill Baker and their children, all of whom love to help tend the farm animals.

A Father Aspires to Build Character in his Children

Mark’s desire to start a farm came from his fellow soldiers in the U.S. Air Force. “The best people I worked with were farm kids. To make my children whole adults, I wanted to give them the farm kid advantage.”

“Military life is rigorous. Farm kids could keep a smile on their face and maintain a good attitude during the worst of times. They really are the salt of the American Spirit,” enthuses Mark.

Five years later, half of his farm revenue comes from pork sales. Baker’s Green Acres farm raises a special heritage breed of hog, the Mangalitsa. This breed has dark red meat and a heavy layer of fat to keep them warm in Michigan’s harsh winter weather.

Mark tills the pig fields and sows their fodder, turnips, mangals (similar to beets), field peas, and pumpkins. He has a friend in Traverse City who grows 1500-pound pumpkins for competition. Mark puts his friend’s seeds in the field and grows pumpkins to 500-pound size. The pigs can’t get their mouths open wide enough to eat them.

That is where the Baker kids get to have some good old farm fun. Their task is to go into the fields and smash the pumpkins to pieces, so that the pigs can feast.

Mark’s primary customers are fine dining chefs and charcuterie artisans in nearby Traverse City. Detroit Chef, Brian Polcyn, author of Charcuterie: The Craft of Salting, Smoking, and Curing, is also one of the farm’s patrons.

Watch this Video of Mark Baker

Regulators Sling Mud at Outdoor Pig Farms, Threaten the Livelihood of Many

The Michigan Department of Natural Resources (DNR) has declared pigs with the characteristics of heritage breeds to be feral, and an “invasive species.” As of April 1, 2012, according to an Invasive Species Order (ISO) issued by DNR, the 2000+ traditional Michigan farms such as Mark’s are in jeopardy.

According to Baker, by definition, a feral pig is a wild pig or one that has escaped the husbandry of humans and re-wilded.

The Department of Natural Resources purview is public hunting land and the agency is responsible for issuing hunting and fishing licenses. At first glance, it appears they are concerned about loose pigs running wild across public and private lands and causing property damage or threatening people. It even seems their own document exempts pigs raised on farms from this new ruling. As it turns out, the only pigs raised on farms that could be exempted are the pigs in confined animal feeding operations (CAFOs). It’s no coincidence the Michigan Pork Producers Association supports the swine ISO.

As Mark explains, the use of the terminology “domestic pigs and wild pigs” was sufficient. The DNR’s use of Latin language confuses the issue, as thousands of Michigan farms are raising this species as a domesticated farm animal.

The next sentence of the declaratory ruling explicitly states, “This subsection does not and is not intended to affect sus domestica involved in domestic hog production.” And yet, the very next sentence reads, “The department shall consult with staff from the Michigan department of agriculture on the development of a phased compliance protocol for the implementation of this section.”

However, the first citizens the DNR met with about this new ruling were the fine dining chefs who patronize custom pig producers! Then, farmers started getting letters about the roll out and necessary compliance.

Confused, the farmers demanded a meeting with the agency.

The DNR scheduled a meeting and sent 10 people. Two armed men, 1 plainclothesman with automatic pistol and a Kevlar jacket were among them, sent to monitor the proceedings. The DNR gave a short powerpoint presentation and a six-minute briefing to the assembled farmers, some of whom had driven eight hours to be there. The agency refused to take questions, insisting that they would meet with each farmer, individually. Bakers Green Acres is a lovely eco-friendly farm at risk under the new DNR scheme.

Farmers were expected to show the government photos of their pigs at these meetings, to get a ruling on whether or not they were prohibited invasive species.

The farmers were understandably outraged and became agitated and shouted out their questions, anyway.

At this point, one of the armed men stood up, hand on pistol, and said, “Gentlemen we are going to keep this orderly.” An armed DNR conservation officer is different than a law enforcement officer, whose job it is to protect and defend the citizens. The armed men in the room that day were sworn to protect Michigan’s natural resources, as opposed to the people who live there.

This unproductive meeting “united the farmers and woke up their American Spirit,” according to Mark.

The DNR armed officers carry weapons similar to what Mark carried into war. Now, Mark Baker finds himself embroiled in a new war to protect his homestead, and the rights of farmers everywhere.

When he joined the military 25 years ago, Mark took an oath to protect and defend the Constitution of the United States. He feels this lifelong oath means he must sue the state for infringing on his rights as a citizen.

Mark has filed a lawsuit against the Michigan Department of Natural Resources, and Rodney Stokes the DNR Director.

There are at least three other lawsuits, recently filed by other farmers and farm organizations.

Sign this Change.org petition
Stop the Imminent Slaughter of Heritage Pigs in Michigan

Kimberly Hartke is the publicist for The Weston A. Price Foundation.